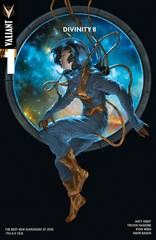 Divinity Ii #1 (Of 4) Cvr A Kevic-Djurdjevic