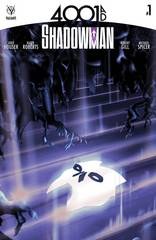 (W) Jody Houser, Rafer Roberts (A) Robert Gill (CA) Travel Foreman. A blood sacrifice is made* a war looms* and the Deadside... rises! In the synapse-shattering world of the future* witness the dawn of the dead's greatest hero and the fate of a young girl who may be humanity's only hope! As Rai leads a revolutionary insurrection against the forces of New Japan* the legendary hero called Shadowman returns to fight another day in the year 4001 A.D.! Valiant rising stars Jody Houser (FAITH)* Rafer Roberts (A&A: THE ADVENTURES OF ARCHER & ARMSTRONG) and Robert Gill (BOOK OF DEATH) reveal the dark side behind the 41st century's coming conflict...and bring you the future of the Deadside today!